With a picturesque hinterland of large hill forests and lakes Chittagong, the second largest city of Bangladesh and a busy international seaport, is a good vacation spot. Its find harbor, green hills forests and sea beaches and soothing sun shine attract holiday makers to swim in the blue waters of the Bay of Bengal, bask in the sun, fish in the lakes and rivers and shoot with camera in the game filled forests. Described by the Chinese poet Traveer Hiuan Tsang (7th century A.D.) as "a sleeping beauty emerging from mist and water" and given nickname of Porte Grande (Grand Port) by the 16th century Portuguese seafarers, Chittagong remains true to both descriptions even to day. It combines the humming of a restless seaport with the pleasure of a hill town. Chittagong is the country's chief port & is the main site for the established of heavy, medium and light industries. Bangladesh's only steel mill and oil refinery are also located in Chittagong.

Situated on the fairy Hill, this building commands a magnificent bird's eye view of Chittagong. This had been the scene of intense activity during the Independence War in 1971. A museum has been established here. 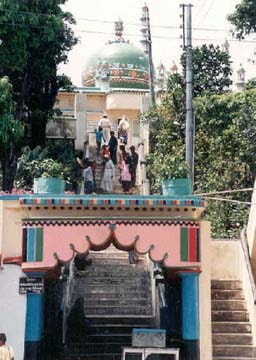 The famous Chilla of Hazrat Sultan Bayezid Bostami is situated on a low hillock at Nasirabad, to the extreme north of the city. He was born in 777 A.D. at Bostan in Iran. He came to Indian and it is said that hevisited Chittagong. There is no mazar of the saint in the shrine. It is an astana and chilla associated with the name of the great saint. A mosque built during the region of Emperor Aurangazeb stands on the bank of a big tank at the foot of the hillock on which the shrine is situated. There are several hundred tortoises in the tank. Tradition has it that these animals are evil spirits (Djinns) who were cast into this shape because they incurred the wrath of the great saint who visited the place about 1.100 years ago.

The shrine of this illustrious saint is at Boxihat in the Chaittagong town on the badar pati road. There is a great controversy about the identity of Hazrat Badar Aulia. There are serveval places in Bangladesh, which are associated with the name of pir Badar and where exists either a dargah or a tomp. A tradition connects him with the spread of islam in Chittagong and the people refer to him by different names, such as Badar Alam, Badar Mokam, Badar pir and Badar Aulia.

Situated about 23 km. north-west of Choumuhani town and 2 km. east of Chatkhil at Jayag in Noakhail district. This asram was established in the memory of historic visit of the Mahatma Gandhi to Noakhali and devoted to his ideology. In 1946-47 Mahatma, the protagonist of Ahimsa ideology visited this region with a view to preach peach. Historical Charka and other Valuables used by Mahatma are preserved in this asram and those evoke deep respect to the unique memories of the great soul.

The Dargah of Hazrat Shah Amanat

The dargah Sharif of Hazrat Shah Sufi Amanat Shah lies to the central jail and east of the Laldighi. He flourished during the later part of the 18th and early part of 19th century. For a pretty long time he concealed his spiritual attainments by serving as a peon in the judge's Count, Chittagong.

This is an old mosque in the Rahmatgonj area of Chittagong. It was built 1336 A.D derives its name from a slab which is said to bear the footprint of the Holy prophet of Islam.

Located in the town, this ancient mosque was built in 1670 A.D after Nawab Shaista Khan. Then the Governor of Bengal. It occupies a whole hilltop and resembles a fort. Hence the locality is known as Anderkilla, meaning the fort area.

Second World War warrior's graveyards are in this Cemetery. There are 755 graves in this graveyard of the great warriors who died d in world war from1939 to 1945 in Chittagong areas. In this well-preserved cemetery at a quiet and picturesque place within the city lie buried in eternal peace over 700 soldiers from British, Australia, Canada, New Zealand, India, Myanmar, East and West Africa, The Netherlands and Japan who laid down their lives on the Myanmar front during the World War II. Every year a number of tourists come here to visit this Cemetery.

Situated on one of Chittagong's highest hills, the building which now houses the Islamic Intermediate College is no less than 300 years old. The main building was constructed by the Portuguese in the 17th century and used by them as an arsenal. It still has an underground chamber with a tunnel and trap doors.

Located on a 250 acre site at Fouzdarhat, about 16 kilometres from Chittagong Railway station, this modern institution provides general education and military training. 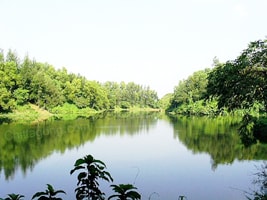 Set amidst picturesque surroundings in the railway town-ship of Pahartali 8 km. From Chittagong, this is an ideal spot for outing and picnic thronged by thousands of visitors every week.

Built in early sixties Kaptai Dam and the lake are the main attractions of Kaptai. If you are not visiting Kaptai separately then, don't forget to go for a boating up to Kaptai on the Kaptai Lake while you go to Rangamati tour.

Patenga beach is about 22 km. from Chittagong and is approachable by a motorable road. On the way to the beach, one passes the Patenga Airport. Another ideal picnic spot is the Fouzdarhat sea-beach about 16 km. from Chittagong. Patenga sea beach is one of the major attractions of Chittagong for the tourists. Besides the sea beach, you can enjoy boating and river cruise in the River Karnaphuli. You can see the busy seaport activities here.

Lacated at Julia, the only training institute of its kind in Bangladesh, situated on the mouth of river Karnaphuli. Marine Academy was wstablished on 3rd September 1962, in order to provide adequately for the manning of the merchant-ship of our country, by suitably trained and qualified officers.

Located near the mouth of Karnaphuli, the Chittagong Port has a recorded history from 9th century. Today, this is the Principal Sea Port of the Country.

This museum located in Agrabad, is a treasure-house of a variety of tribal cultures and heritage of Bangladesh. This museum is recognized as one of the best-specialized museums in South East Asia.

About 24 km. From Chittagong, a hilly village famous for one of the oldest Buddhist temples in the subcontinent.

Chittagong lies an interesting place known as Sitakund, served by a railway station of the same name. Famous among the many temples in this place are the Chandranath Temple and the Buddhist temple. In the vicinity there is an also hot spring. The Buddhist temple has a footprint of Lord Buddha. These places particularly the Hilltops are regarded as very sacred by the Buddhists and the Hindus Siva-Chaturdeshi festival is held every year in February when thousands of pilgrims assemble for the celebrations which last about 10 days. There is a salt-water spring 5 km, to the north of Sitakund known as labanakhya.

The town-ship, the focal point of Rangamati Hill District is located on the western bank of the Kaptai lake. Rangamati is a favorite holiday resort because of its beautiful landscape, scenic beauty, its flora and fauna, homespun textiles, bamboo handbags, flower vases and silver jewellery and the tribal men and women who fashion them, are other attractions. The tribal handicraft factory and sales center run by Bangladesh Small Industries Corporation produces many varieties of souvenirs made by bamboo, cane, straw, textile and leather. For the tourists the attractions of Rangamati are numerous-tribal life, fishing, speedboat cruising, water skiing, hiking, or merely enjoying nature as it is. Other places worth visiting include, tribal museum, Bein textile factory and sales center, kalpataru, lvory product shop, Hanging bridge, tribal village, Chakma Rajbari (kings palace), weekly hat (market). Above all tribal dance and music will captivate visitors, which can be organized by Bangladesh Parjatan Corporation if prior notice is given. 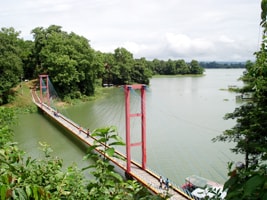 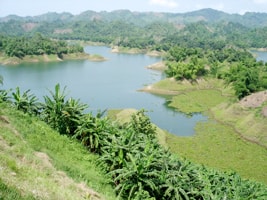 The only tribal culture museum in the Hill tracts region was established at Rangamati town in 1978 and run by the tribal culture institute. It preserves valuable objects and articles of different tribes depicting.

48 km from Chittagong on the Kaptai road is Chandraghona where one of the biggest paper mills in Asia is located. Close to the paper mill there is a rayon factory which products synthetic fibers from bamboo.

Khagrachari is the natural wild beauty of Bangladesh. Here you can visit the tribal lifestyle of Chakmas' in Khagrachari. You can also visit Alutila hill. Approximately 100 meters long a very dark Cave is the mysterious beauty of Alutila hill.

You can go to Bandarban from Chittagong by road. Chimbuk hill is one of the major attractions of Bandarban. You can enjoy the journey to Chimbuk Hill by jig jag hilly roads. It's the third highest mountain in Bangladesh of approx. 3000 ft height. Reach Chimbuk by jeep or microbus from Rangamati. A beautiful Rest house is there on the top of Chimbuk hill.

Decidedly untypical of Bangladesh in topography and culture, the Chittagong Hill Tracts have steep jungle hills, Buddhist tribal peoples and relatively low-density population. The tracts are about 60km (37mi) east of Chittagong. The region comprises a mass of hills, ravines and cliffs covered with dense jungle, bamboo, creepers and shrubs, and have four main valleys formed by the Karnapuli, Feni, Shangu and Matamuhur rivers.

Rangamati, a lush and verdant rural area belonging to the Chakma tribe, is open to visitors, as is Kaptai Lake. The lake, ringed by thick tropical and semi-evergreen forests, looks like nothing else in Bangladesh. While the lake itself is beautiful, the thatched fishing villages located on the lakeshore are what make a visit really special.

Boats that visit the villages leave from Rangamati. Bring your swimming gear because you can take a plunge anywhere.