Rajshahi has seen the most glorious periods of Bengal's Pala dynasty, it is famous for pure silk, mangoes and litchis. Attractive silk products are cheaper. A visit to Varendra Research Museum at the heart of the city would be most rewarding. There are also a number of ancient mosques, shrines and temples in and around Rajshahi. Connected with Dhaka by road, rail, river and air. Rajshahi is located on the bank of the river Padma. Bangladesh Parjatan Corporation offers comfortable accommodation and restaurant facilities at Rajshahi.

Located at a distance f 18 km. Bogra town. Mahasthangarh is the oldest archaeological site of Bangladesh on the western bank of river Karatoa. The spectacular site is an imposing landmark in the area having a fortified ling enclosure. Beyond the for field area, other ancient ruins fan out within a semicircle of about 8 km. radius. Several isolated mounds, the local names of which are Govinda Bhita Temple, Khodai Pathar Mankalir kunda, Parasuramer Bedi, Jiyat Kunda etc. surround the fortified city. This 3rd century B.C. archaeological site is still held to be of great sanctity by the Hindus. Every year (mid-april) and once in every 12 years (December) thousands of Hindu de4votees join the bathing ceremony on the bank of river Karatoa. A visit to the Mahasthangarh site museum will open up for one a wide variety of antiquities, ranging from terracotta objects to gold ornaments and coins recovered from the site. Also noteworthy are the shrine of Shah Bulkhi Mahisawary and Gokul Medh in the neighborhood of Mahasthangar.

Situated at Rajshahi, this museum has a rich collection of objects of Mohenjodaro and also of 16th to 19th century A.D. This is devoted to the study of ancient history and culture. Its rich collections contain interesting objects of past Hindu, Buddhist and Museum heritage. It is located at the heart of Rajshahi town and maintained by Rajshahi University authority. The year of its formal establishment is 1910 A.D. Admission is free.

Paharpur is a small village 5 km. west of Jamalganj railway station in the greater Rajshahi district where 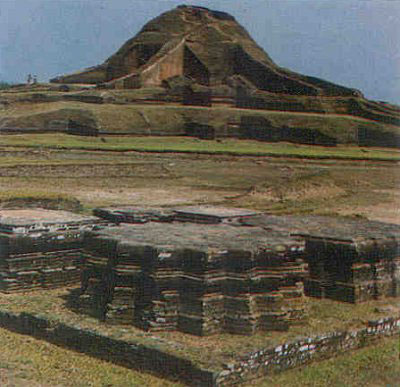 the remains of the most important and largest Known monastery south of the Himalayas has been excavated. This 8th century A.D. archaeological find covers approximately an area of 27 acres of land. The entire establishment, occupying a quadrangular Court, measuring more than 900 ft. and from 12ft. to 15ft. in height with elaborate gateway complex on the north, there are 45 cells on the north and 44 in each of other three sides with a total number of 177 rooms. The architecture of the pyramidal cruciform temple is profoundly influenced by those of south-east Asia, especially Myanmar and Java. It had taken its name from a high mound, which looked like Pahar or hillock. A site museum houses the representative collection of objects recovered from the area. The excavated findings have also been preserved at the Varendra Research Museum at Rajshahi. The antiquities of the museum include terracotta plaques, images of different gods and goddesses, potteries, coins, inscriptions, ornamental bricks and other minor clay objects. UNESCO has declared it as a World Heritage site. Interested tourists may avail Package Tours offered by Bangladesh Parjatan Corporation to visit most of the interesting places in the northern Bangladesh. For details please contact Manager (Tours). BPC Head Office, Phone: 880-2-8119193, 8117855-9/118. Fax: 880-2-8117235.

About 75 km. from Pabna town. It is also a historical place connected with the frequent visit of poet Rabindranath Tagore.

A milestone in the history of modern development of Bangladesh. It is the single largest projects Bangladesh has ever implemented. The bridge was constructed on the river Jamuna connecting east and north-western region on the country. The 4.8 km. long bridge was constructed at a cost of US $ 950 million thus creating an uninterrupted surface transport facility from Teknaf, southernmost tip of Bangladesh of Tetulia, the northern tip of Bangladesh. Construction of this bridge ushered in a new vista to national integration, economic rejuvenation of the northern region, specially tourism development of the country. The Jamuna Multipurpose Bridge Authority (JMBA) has a plan to build an international resort on the eastern side of the bridge by turning surplus infrastructure and constructing new ones and recreational facilities.